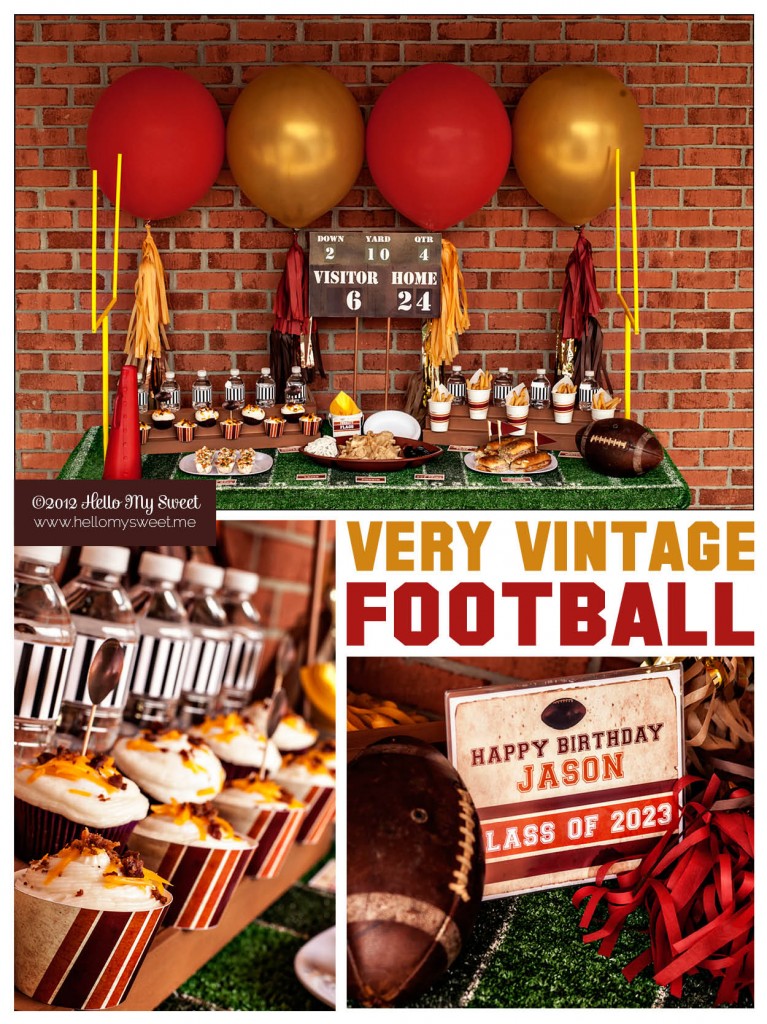 Mondays…  It sure does get a bad rap when it comes to the most favorite of days in the week.  Most of us think of it as the time when the weekend is over and when we must return back to work.  And the only thing that can seem to make a Monday bearable is Monday Night Football.

A time when males of the species watch other males throw an oblong shaped ball back and forth on a grassy field.  Sometimes it is kicked, other times dropped.  If we are very lucky we get to see some bone crushing open field tackles, a blocked field goal attempt, or some insane trick play.  At the end of it all, one team emerges victorious; the other leaves the field of battle in defeat.  The male urge to see other men slam into each other for no other reason than they are the one carrying the ball is satiated.  It also seems to be the ONLY time where it is socially acceptable for men to slap each other on the ass.  Just saying… But most importantly, it is a time when the male stomach has been satisfied by manly foods of goodness that can only be consumed while watching sports.

That is right everyone, Hello My Sweet is ready for some football!  Are you?  Football season is rapidly approaching.  And if you’re not ready, then let us show you how to prepare the ultimate spread for your football loving loved one, on the cheap even. This Vintage Football spread is the the perfect remedy.

For this table we wanted to really make an impact with the table covering.  And what better way than to make it look like an actual football field?  We went to our local Lowe’s home improvement store and purchased a faux grass outdoor area rug.  Basically looking like a six foot section of turf, it was time to mount it to our plastic folding table with the trusty staple gun.  I then took a step back and looked at it.  It looked terrific, but it was missing something… Then it hit me!  I’ll put down the field marking lines and then I’ll paint every other section a darker color green.  The contrast of the lighter “turf” green and the darker bands looked great in my mind’s eye, and turned out even better in reality.  We had experimented with laying down lines with just some ordinary masking tape.  And while it did lay down nicely on the outdoor rug and look good, I had accidentally found out that leaving the tape on for a period of more than 24 hours would result in the tape coming off.  We needed a more permanent solution; also Heather had wanted a more “sprayed on” effect.  I was able to find a pack of number and letter stencils at our local Dollar Tree.  And while there I picked up some more of that versatile foam core.  I swear I love this stuff.  I’m not sure about Heather, but before we started doing this business I had NEVER used foam core boards before.  Now I’m not sure how I ever lived, and crafted, without it!  I still had some antique white spray paint left over from a different project, so I cut out the numbers that I needed from the stencil and made my yard line stencils out of the foam core.  One was a bit fatter in width, this was used for the perimeter of the field and for the end zone lines, while the other was thinner and used for the yardage lines.  I will let you know that we did not realize how much of an undertaking this would be.  We knew the effect we wanted to achieve, and while we could have taken some shortcuts, we did it this way and I think the results speak for themselves.  But…it was a pain in the butt! 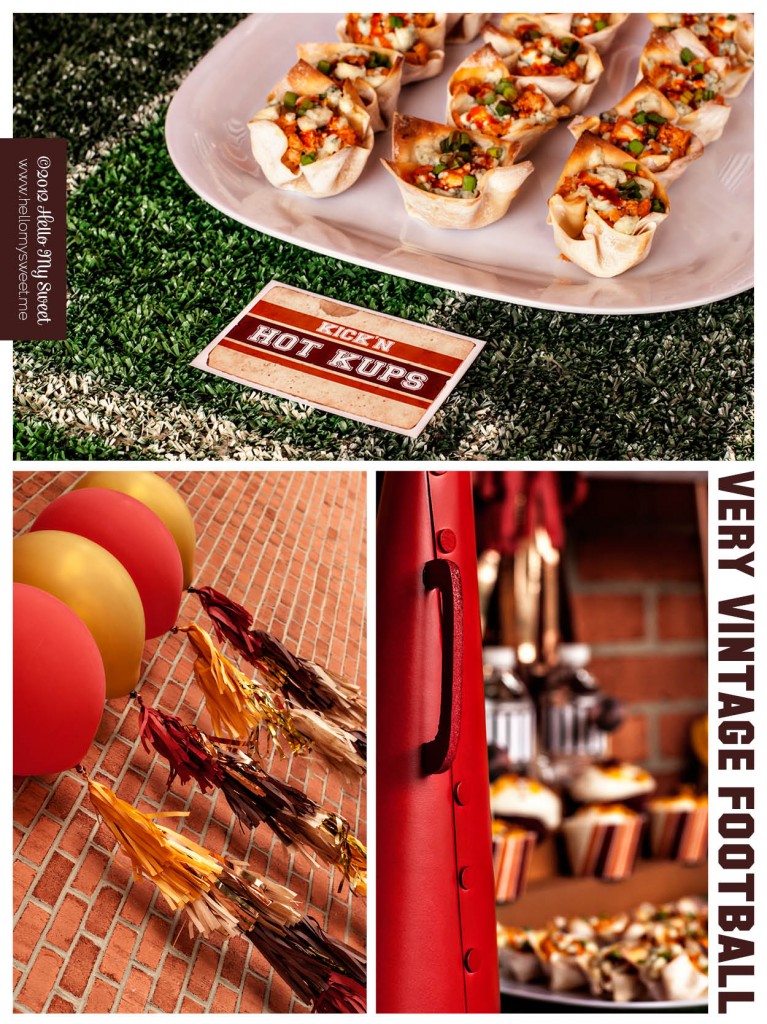 Next up were the field goal posts on each end of the table.  Pretty simple stuff, just some unused wooden dowels I had laying around from Wal-Mart and yellow spray paint.  We also decided to make a set of “bleachers” for some of our goodies.  We had actually made one way back when we did our Vintage Circus table, and sometime during the move over the summer of 2011, it was lost or thrown out.  Knowing me, probably the latter.  I began work on a new set, 2 this time, one for each end of the field slightly canted inward.  We will post DIY articles later on in the week for the bleachers, and the field goal posts, but all it took was some inexpensive wood pieces from Lowe’s, some Loctite, and a few clamps.  Finish it off with some brown spray paint…instant bleacher stands!

For our serving pieces, we decided to keep it really simple since the “bleacher stands” would actually be holding 3 different food items themselves.  We found that we only needed 3 other serving pieces.  And wouldn’t you know it; they all came from Dollar Tree.  Two white plastic melamine plates, and in Heather’s words an “absolutely tacky” football shaped 3 vessel serving tray.  In her defense, she didn’t see the “grand vision” like I was, and during the review of the pictures we took she begrudgingly admitted that it actually “turned out decent.”  To paraphrase my favorite super hero, of course it turned out decent…I was directly involved. 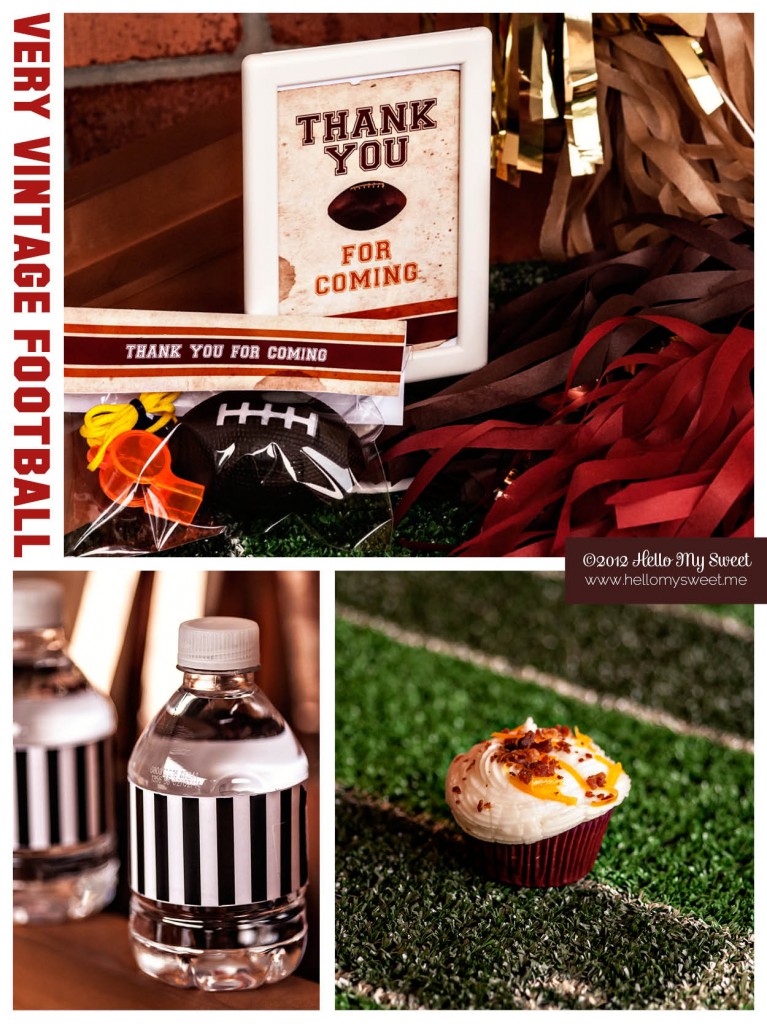 And on those serving pieces we served up some slight variations of old standby football party foods.  First up on the bleachers were our “Field Goal Fries” and “Official Water” bottles.  Fairly standard stuffs…but wait.  What are these pint sized cakes that are emanating a tantalizing scent of beer, bacon and cheese.  Oh my snaps!  Did that last sentence actually include the words cake, beer, bacon AND cheese?  Stay calm, your vision does not need checked, for it is true.  These would be Hello My Sweet’s delectable Cheddar-Beer cupcakes, or also known as “The Cupcake for Men.”  Let us move on to our “Kick’n Hot Kups”, a neat twist on the traditional hot wings.  Also up are our “Off Sides Sliders”.  Delicious Sweet Hawaiian mini rolls with deli ham and Swiss cheese topped with a diced onion sautéed in butter, Dijon mustard and poppy seeds.  And as kind of a play on words, our football tray featuring white chocolate covered pretzel “Laces”, actual “Pig Skin” (see; pork rinds) and “Black Eye Paint” or rich and creamy licorice pieces.  Wiping off your mouth and/or hands with our yellow “Penalty Flag” napkins was totally optional.

To complete that vintage look and feel to the table we used a combination of vintage football paraphernalia and a new set of party printables Heather designed.  You can find those at our Etsy shop here, and can come in any team color combination…yes even the Cleveland Browns team colors.  But really who would want that?  I digress… Where was I?  Oh yes, a super nifty vintage Spalding football from a fellow Etsy store, Happy Blue Moon, give them a look-see when you have time.  They have some great vintage finds, but we call dibs on that sweet retro adding machine for a Christmas present!  We also constructed a scoreboard to go in between the bleachers.  All it took to make that was a scrap piece of 2”x 2” wood that was leftover from Heather’s new custom built computer desk, even more wooden dowels and foam core, and a small section of the turf rug wrapped around the piece of 2×2 wood.  The old time scoreboard graphic that we placed on the foam core is available in our Very Vintage Football party printables and has this great dilapidated look to it.  And holding down the left side of the table is a homemade homage the megaphones of yore.  Some red paint and poster board, BAM…done!

Last but certainly not least, we collaborated with our good friend Carmen from The Flair Exchange.

We had told her about our crazy idea of doing a vintage themed football dessert table, then Heather and Carmen banged out an idea for us to use large balloons and some of her awesome balloon tassels.  Not only did the balloons look great on the brick backdrop we used, but the tassels really gave it that sports event feel to it.  While setting up, Heather had even remarked that they reminded her of the pom-poms that cheerleaders around the country use. 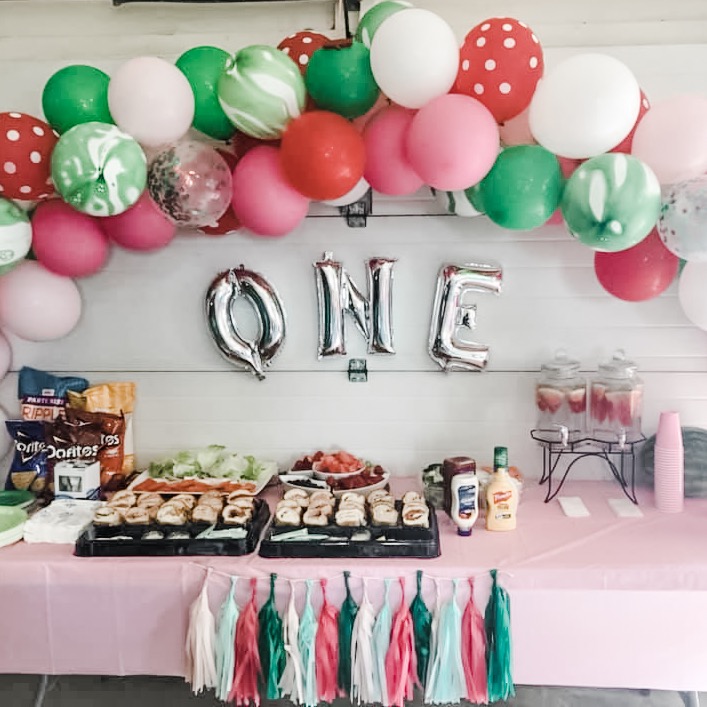 I love these balloons and tassels you use in the vintage football theme party. I’m interested in where i can get the bronze/gold balloons used and the tassels. Any help would be appreciated. Thanks